Origins of the areas along the Kōya Kaido

The origin of the place name Chiyoda 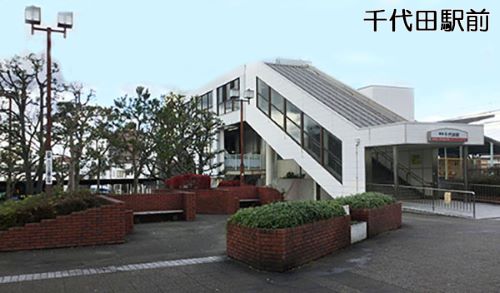 In the year 22 of the Meiji Period, the 3 villages: Ichi Village, Ichimura-shinden Village and Mukaino Village merged, changing the name to Ichi-shinno Village, taking one character from each village name, but it couldn’t become familiar. Then, during the Taisho Period, when the Taisho Emperor enthronement ceremony took place, the newspapers announced that the Imperial Palace was going to be named “Chiyoda Castle”, and the local people asked permission to the Imperial Household Agency to use the name “Chiyoda” for their village, which was approved. From the year 5 of the Taisho Period, it became Chiyoda Village, and in the Showa Period, the Chiyoda Station was born in line with the opening of the Army Cadet School.

Tales about the Nagano area 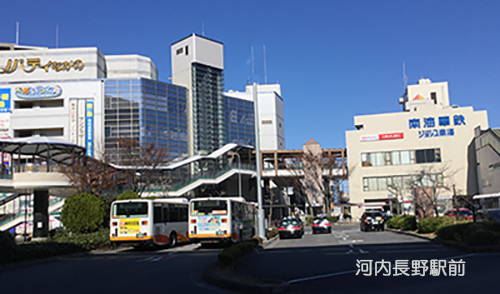 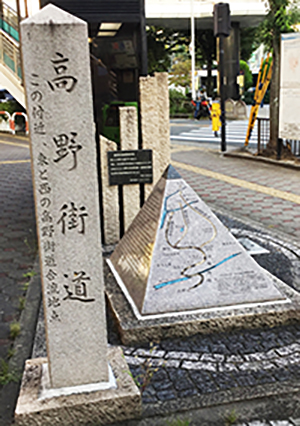 Nagano was located where the Saijō-gawa river and Ishimi-gawa river came together, connecting to the East and West Kōya Kaidō (Kyoto, Sakai, Kishō), the pilgrimage road Junrei Kaidō (Izumi) and the Gojō Road (Yamato). It was called “Koyadō” (wood pile up place) as it was a place where wood was accumulated. And the place along the Saijō-gawa river was called “Ichiba” (market) showing that it was a strategic point for physical distribution. With the establishment of the railway station and the redevelopment of the station square, it became very difficult to determine the exact point where the East and West Kōya Kaidō of the Edo period come together, but according to the existing old drawings, it seems that the meeting junction is near the present police box in the station square, that also marks the junction to the Yamato Gojō road.

Koyadō Goshō: Fujiwara Michinaga was the first one from the imperial family and the court noblemen to visit the temple of Koya. At the beginning, the main routes were to go down the Yodogawa river, then going along the seacoast (Izumi), and taking the route of the Kinokawa river, or going south the Yamato basin by the Gojō route. Afterwards, Emperor Toba began to take the West Kōya Kaidō (Kawachi route). And in the last part of the Kamakura period, the biggest pilgrimage in history to the Mt. Koya was the one of Emperor Gouda. The preparations for the visit started from about 5 to 6 years before, putting in good condition the roads, temples and shrines in the way. Among those preparations, the rest station “Koyadō Goshō” was established. According to the records, the visit to the temples consisted in a procession of more than a thousand people.

During the Edo period, Mikkaichi Inn was established as a result of the new system of public staging posts (denma seido) imposed by the Bakufu (the Shogunate). Between Sakai in Izumi province (Senshu) and Kimi Pass (Kimi-tōge) there were 25 horses and 25 riders to perform the public transportation duties. 2/3 of the expenses were afforded by Mikkaichi village and 1/3 by Ueda village. Also, the fares to be paid by general users for hiring horses, riders or transporting personal effects, etc. were officially established and displayed on boards called Kosatsu at the display places (Kosatsu-ba). The Mikkaichi Inn flourished, gathering new stores and houses, and became to be called Shin-machi (new town) separated from Ishibotoke village.